In praise of Edo 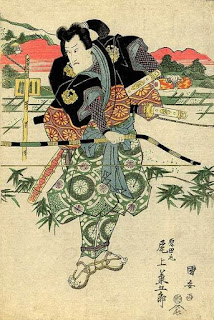 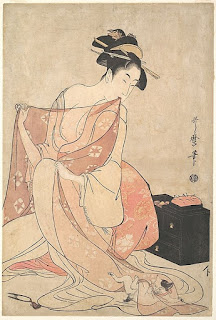 For one brief moment,
Mankind touched the world-soul there
And then parted ways. 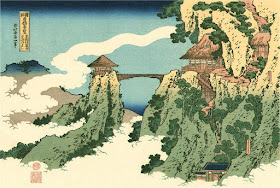 Okay, two hundred fifty years of Japanese history under the military leadership of the Tokugawa family obviously deserves far better than one haiku in its defence. Particularly from yours truly, who has written so many hard words on the Kingdom of Yamato for so many reasons these past years. Please allow this worthless blogger the attempt to do better than that in my usual way, even if in doing so I clumsily forsake the brevity and elegance which must match the style of my subject.

The more I read about Edo-era Japan, the more I find in it to admire, and the more I find I must lament its loss, its destruction by its very leadership. I have held previously, and still do, that what is noble and sweet and admirable in traditional Japanese society has been reflected and amplified from the importation of certain forms from Tang-dynasty China.

In terms of governmental and political principles, the parallels with Tang China were close. Tokugawa Ieyasu undertook land reforms similar to those of Li Shimin, if only for pragmatic and political reasons. Once he broke the power of his political rivals he turned much of the arable land over to the peasantry and the old samurai families, and placed them on land reclamation projects. Though this was largely for the reason of disarming them, it had the added effect of contenting them and spreading the wealth to the poor. These reforms ended up making Edo Japan one of the most egalitarian societies in the world, according to Dr Saito Osamu – comparable to many of today’s European welfare states in terms of wealth and income distribution. Between rural peasantry and urban mercantile and military élites, the wealth disparity didn’t far exceed two to one. And the land was quite evenly distributed, with each family (the smallest unit with recognised legal rights) tilling well enough to meet their own needs after taxes were paid. It’s something of an anachronism and a cultural imposition to call it so, but Edo Japan was essentially a distributist society.

Confucian learning was intensely valued, particularly the neo-Confucianism of Zhu Xi (to the point where the entirety of Edo Confucian learning was styled Shushi-gaku 朱子學). Tokugawa Ieyasu was especially interested in promoting Confucian principles to consolidate his legitimacy. He established the class structure promoted by Ban Gu in the Han Dynasty: with samurai (supposedly the equivalents of the Chinese literati) at the top, then the peasantry, then the urban workmen, then the merchants at the bottom. The result – at least in the Japanese interpretation – was timocratic. The lovers of honour, the men who (putatively) lived by the sword, were placed deliberately at the top of society; the lovers of money at the bottom. Though Confucian learning, erudition and refinement were all deeply respected in the complete man, the masculine ideal was still that of the warrior.

But Confucianism didn’t stay at the top. The Tokugawas’ respect for Chinese learning did filter down to the grassroots; it saturated all of cultural life – poor as well as rich, women as well as men. As the (much-earlier) Tale of Genji puts it: ‘it is when there is a plenitude of Chinese classical learning, that the Japanese soul is respected in the world’. Or, to quote Gu Hongming’s The Spirit of the Chinese People:


If you want to see the grace and charm expressed by the word debonaire in the true Chinese feminine ideal, you will have to go to Japan where the women there at least, even to this day, have preserved the pure Chinese civilisation of the Tang Dynasty. It is this grace and charm expressed by the word debonaire combined with the divine meekness of the Chinese feminine ideal, which gives the air of distinction [meiki or minggui 名貴] to the Japanese woman—even to the poorest Japanese woman today.

There is indeed much to praise in the ideal of the Japanese woman, the Yamato nadeshiko 大和撫子 of the Edo period. Unlike her contemporary Chinese counterpart, who if she was wealthy enough, crippled her own feet and rendered herself in that way artificial and ornamental, the Japanese ideal woman was disciplined and dynamic, hardworking and subtly alluring – never flighty or superficial. Physically possessed of a supple willowy figure, with elegantly-coiffed black hair, snow-white skin and deep red lips; she was also spiritually endowed with a stoic, all-pervading modesty and a kind of kenotic selflessness. The Yamato nadeshiko of the Edo period is a deep inward concentration of the talented, free-spirited, full-figured Tang Chinese womanly ideal, and yet has a subtly different character.

Women do hold up half the sky, and it should be no surprise therefore that the society they embody has the same characteristics as they do. The society and culture of Edo was similarly concentrated and disciplined, yet it expressed itself in singularly sublime and beautiful ways. In one vital respect Edo did not emulate the Tang. It was not expansionist. It was a society which ‘lived and let be’; it minded its own business quietly and didn’t meddle on the continent at all. The two hundred fifty years of the Tokugawa bakufu 德川幕府 were years of peace – later Western and even later Japanese historians, believing in the liberal brass law of ‘free trade’ or in the militaristic iron law of expansion, would deride this policy as ‘isolationist’. But more than being mere imitators of the Chinese way and the Chinese learning (as were the Heian and Muromachi periods), the Edo period was a deep, spiritual, feminine concentration of the same cultural energies, so ebulliently released in Tang and Song China.

This concentration found expressions not only in high-flown gendered ideals of warrior and wife. The social stratification combined with relative œconomic equality produced a spectacular urban culture in Edo itself where entertainments of all sorts could blossom. Edo was a golden age of visual arts (particularly woodblock prints like the ones shown above, filled with grace and power), performing arts (especially kabuki 歌舞伎 and the tradition of the geisha 藝者), music and literature – including great novels like The Tale of Eight Dogs, which were influenced by Water Margin and Romance of the Three Kingdoms, yet carried their own character. This sublimely-beautiful explosion in cultural output corresponded with a modest, linear œconomic and population growth pattern. The average family size was above replacement with three children, but also not too large; and the œconomy grew to match – and this was not the result of higher levels of resource exploitation, but through gradual improvements in technology and natural boosts to efficiency and ingenious ways of reducing or eliminating waste (again, with Japan’s elegantly-practical women doing the great bulk of that ‘household work’). The result was a society which was sensitive and attuned to its immediate natural environment, œcologically-harmonious as well as peaceable!

Edo Japan was not a utopia. Christians were violently persecuted by the early Tokugawa bakufu. Easy divorce, prostitution and pornography were far from being inventions of the Meiji revolutionary state, but were already well-established in the same urban culture which produced art, music and drama of such beauty. And the Confucian class system had its ugly underside, too: the handlers of meat and leather – both necessary professions, but distasteful to Japanese sensibilities – were considered ‘untouchables’ by the rest of society. But there is a great, great deal about Edo Japan to admire and hold in reverence, the more so when we consider the devastating cultural effects that came after the appearance of Matthew Perry’s warships; when Emperor Meiji exchanged his nation’s traditionalist, Chinese-enlightened soul for the libido dominandi of modern revolution and the power promised by German-engineered steel.
Matthew Franklin Cooper at 12:08 am